There’s more bad news for the Australian economy as its construction sector, responsible for more than 1 million jobs, continues to slow.

Australian housing approvals hit a six-year low, according to the Australian Bureau of Statistics (ABS), as softening property markets slash the profit incentive of developers and lending restrictions take their toll.

There were 14,501 new approvals in June, falling by more than 20% from their level last year, and 1.3% from last month. But those declines are even worse when you compare yearly figures. 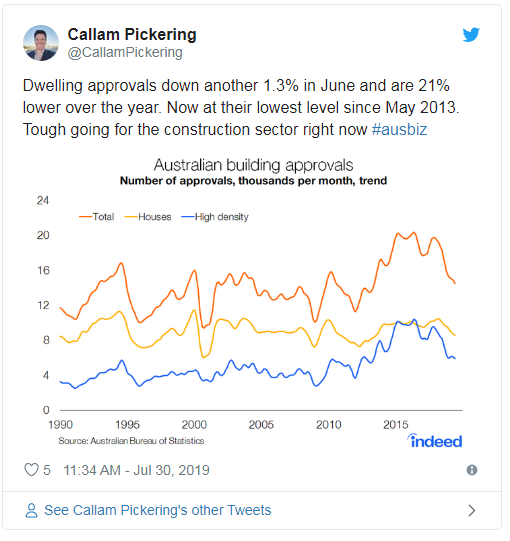 The peak in construction activity was stimulated in part by rocketing prices in Sydney and Melbourne. Since declining, high-density apartments have been particularly hard hit, with the discovery of serious flaws in the integrity of Sydney apartments not helping — at least four buildings have been abandoned.

“Despite recent stimulus measures, the downwards trend in houses is set to continue over the remainder of 2019 given the weakness in land sales and the lag to the approval stage. Risk to the downside for the apartment market remains with apartment pre-sales remaining weak and build quality concerns escalating,” BIS Oxford Economics economist Maree Kilroy said in a note regarding the approval figures.

The building decline has been led by New South Wales, one of the largest housing markets in the country, where approvals dried up by 5.4% this month and almost 30% this year. South Australia and Western Australia aren’t far behind, both down by about a quarter over the same period. Meanwhile, Victorian approvals have declined by a more modest 11.4%.

With the number of approvals a forward indicator of construction activity to come, it’s a serious concern for those employed by the sector and the potential impact of a downturn.

It’s a slump the Reserve Bank of Australia (RBA) hopes its two rate cuts in two months will stop. Typically, as the cost of borrowing shrinks, the greater demand that shows up in the property market. 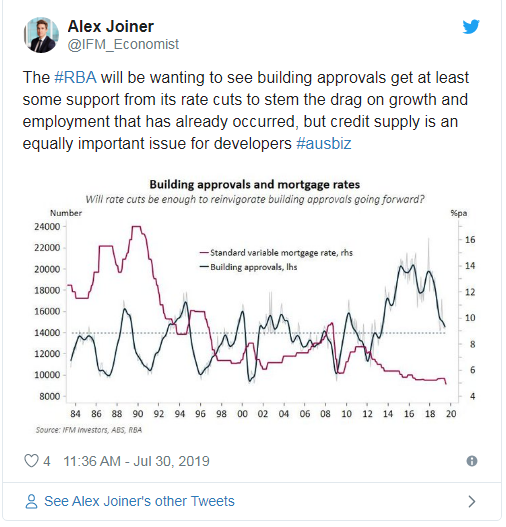 It would want to. The cost of a construction slump could slash as much as 0.5% off Australian economic growth, which could force the RBA’s hand if it doesn’t cut before then, AMP Capital chief economist Shane Oliver tweeted. 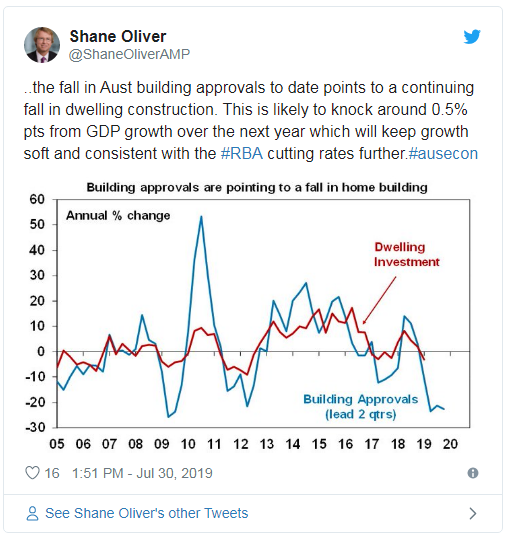 A possible upside of the dismal approval number is that it could help stabilise struggling markets by preventing an oversupply of property, particularly apartments.

As auction clearance rates continue to strengthen in Sydney and Melbourne, and demand is anticipated to return to the market coming into spring, prices could rebound.

Full article is at: https://www.businessinsider.com.au/sydney-and-melbourne-house-prices-could-rebound-as-the-rate-of-development-in-australia-slumps-to-a-six-year-low-2019-7#4YsqvTjMuVYIRkkJ.99