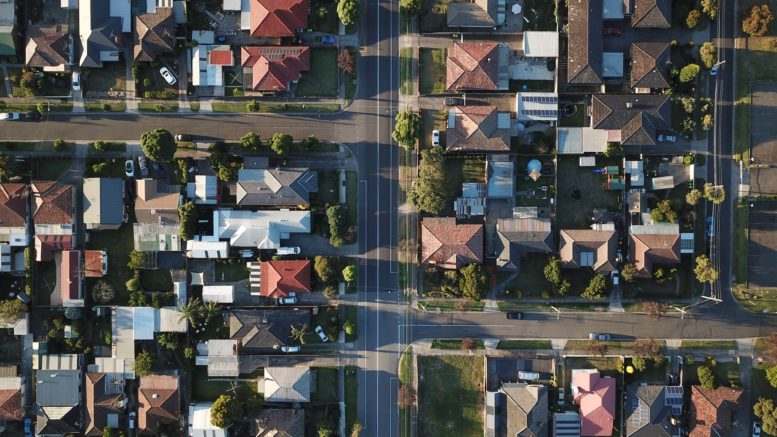 It’s really been a year of two halves.

The year started with significant negative sentiment, including fears about the results of the Hayne royal commission into banking and an upcoming federal election, as well as fears about overseas economic problems including the USA China trade war and Brexit.

In the first half of the year, the Sydney and Melbourne property markets continued their slump, but since bottoming out in June earlier, the house prices have recovered strongly, buoyed by three interest-rate drops some tax cuts and the banks loosening their lending criteria.

However, our markets are fragmented. While the Sydney and Melbourne property markets are showing a clear turnaround, the other states are still lagging.

Combined capital city dwelling values were 4.6% higher over the November quarter while combined regional market values only rose by 1.1%. 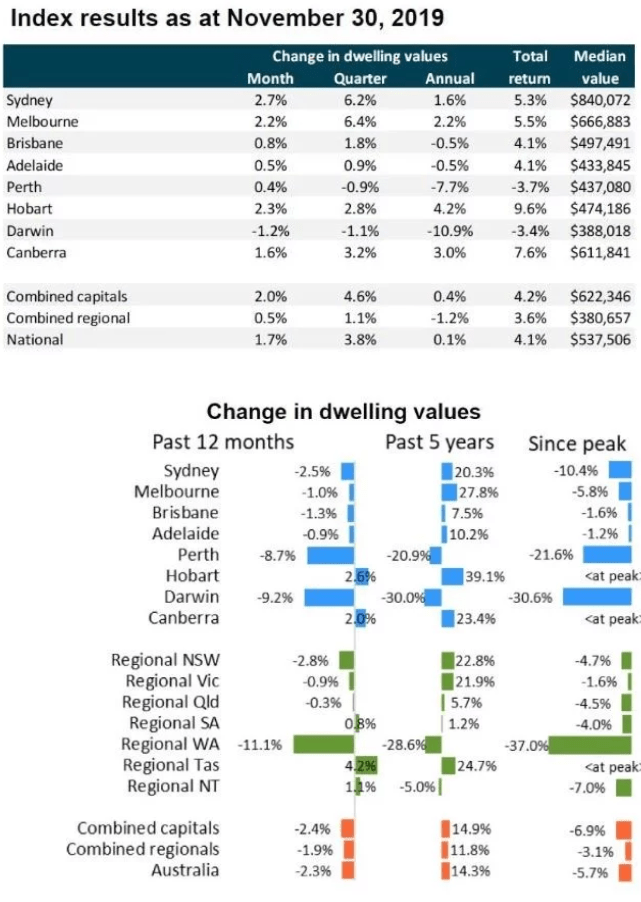 The Sydney property market is on the move, having recorded its quickest turnaround in decades.

Since bottoming out after the election in May, Sydney housing values have recovered 6.2% in the last three months, but the market remains 8% below the July 2017 peak.

Despite the rise, Sydney dwelling values are still tracking around the same level as they were three years ago.

The recovery trend is most concentrated across the premium end of the housing market where values were previously falling more rapidly. 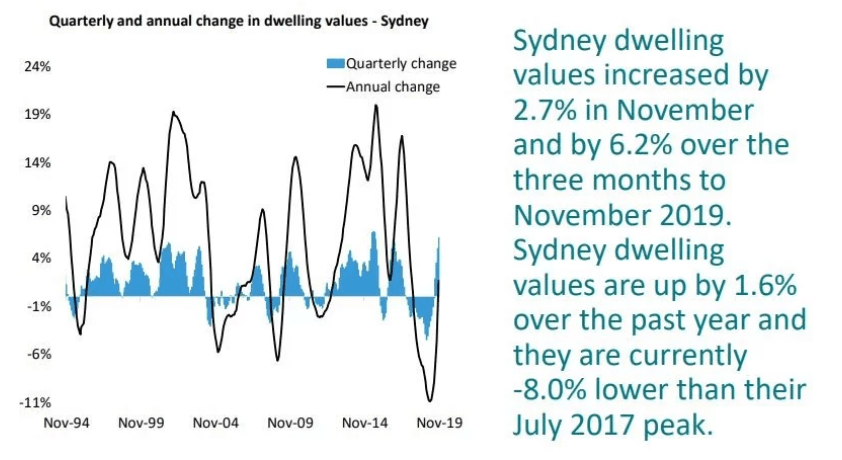 Currently investors are abandoning the off-the-plan apartment sector for many reasons, including concerns about construction standards, and many of those who purchased off-the-plan a few years ago are now having trouble settling with valuations coming in on completion at well below contract price at a time when banks are more reluctant to lend on these properties.

In the background, strong economic growth and jobs creation is leading to population growth and ongoing demand for property in Sydney.

At the same time, international interest from tourists and migrants continues.

The beginning of this new cycle is a great time to look at buying an investment grade property in Sydney which is currently offering investors an opportunity to buy established apartments in the eastern suburbs, lower North Shore and inner west at a discount to what they would have paid a number of years ago.

Melbourne property prices are surging with dwelling values up 2.2% higher over the month of November, taking values 8.3% higher since the market bottomed out in May this year.

Melbourne home values are now only 3.7% below their October 2017 peak.

At the current rate of growth, we are likely to see Melbourne home values reach a new record high over the first few months of next year.

Stronger capital gains are concentrated within the upper quartile of the market, where 25% most the most expensive properties recorded a gain of 11% through the recovery phase to date, while values across the lower quartile are up a smaller 5.7%. 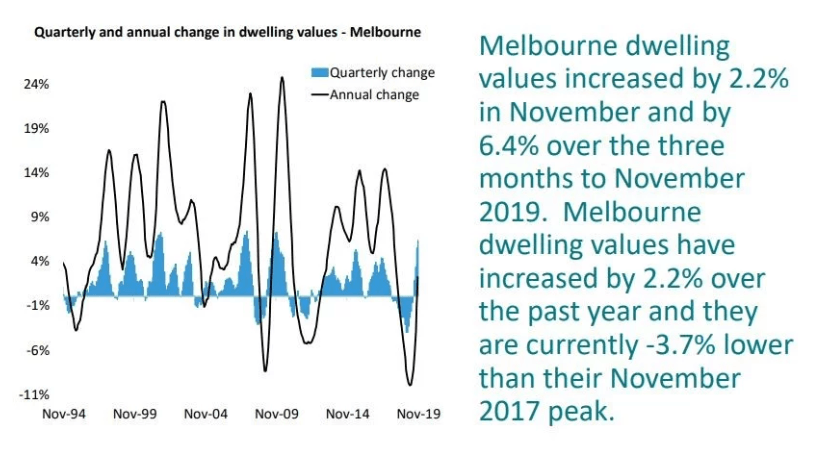 Overall, Melbourne property values will be underpinned by a robust economy, jobs growth, Australia’s strongest population growth and the influx of 35% of all overseas migrants.

Remember, Melbourne rates as one of the 10 fastest-growing large cities in the developed world, with its population likely to increase by about 10% in the next four years.

Brisbane’s property downturn has been quite shallow compared to the big two capital cities, with local values only 0.8% below their peak.

But this followed a relatively mild growth cycle where growth in housing values in Brisbane was only 7.5% over the past five years.

But now Brisbane values have posted their second consecutive month of subtle gains.

CoreLogic reports that since bottoming out in June, Brisbane’s dwelling values are up 2.2% with little difference separating houses and units where the recovery is recorded at 2.2% and 2.1% respectively since June.

The recovery trend has been slightly stronger across Brisbane’s premium market, with the top quartile recording a rise of 2.4% compared with a 1.5% lift across the

The following metrics show how sluggishly the Brisbane housing market is performing: 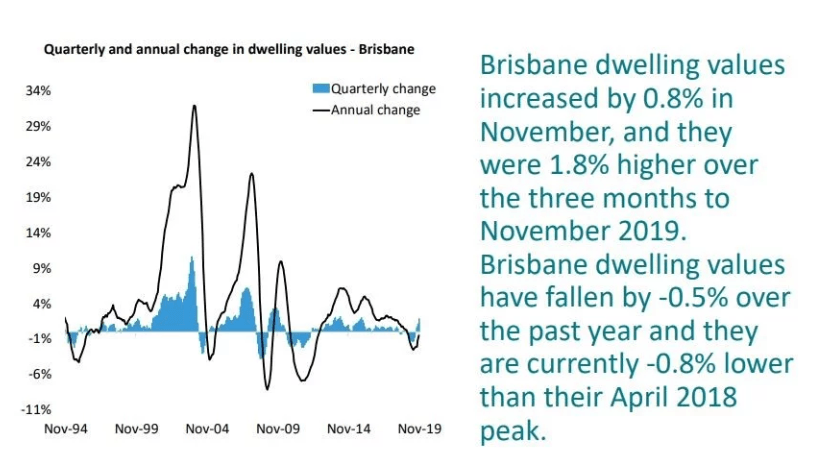 With migration rates lifting, supply under control and generally healthy levels of housing affordability, the Brisbane housing market fundamentals are looking healthier compared to most other capital cities.

At the same time the underlying strong demand from home buyers and investors from the southern states at a time when yields are attractive and housing affordability is relatively healthy and putting a floor under property prices.

Brisbane’s economy is being underpinned by major projects like Queen’s Wharf, HS Wharf, TradeCoast, Cross River Rail, the second airport runway and the Adani Coal Mine, but jobs growth from these won’t really kick-off for a few more years.

Full article is at: https://www.smartcompany.com.au/industries/property/property-markets-december-2019/ published at 19 Oct 2019, 12:30pm

Be the first to comment on "State by state: A December update on Australia’s property markets"