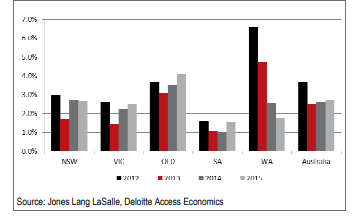 Lacking such external drivers as commodity prices (Western Australia) and a strong international tourist magnet (such as the Gold Coast in Queensland), the state of NSW and the capital city of Sydney, are heavily dependent on a rebound in the residential construction sector. Historically a housing recovery has been a lead indicator for a cyclical upturn in the broader NSW economy.

Global economic conditions are improving and Australia’s GDP growth is also forecast to pick up over the next two years, particularly in the eastern seaboard states of Queensland (QLD), Victoria (VIC) and New South Wales (NSW). QLD and NSW are the only two states that are forecast to grow at or above the Australian GDP growth rate of 2.7% per annum in the next two years (QLD – 3.8% per annum and NSW – 2.9% per annum over 2014-2015… Read more