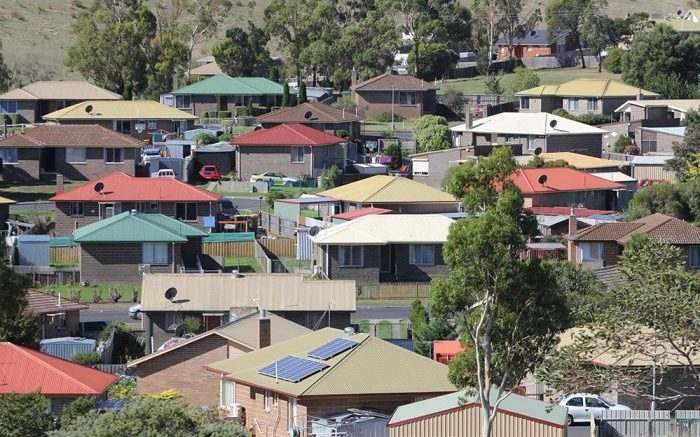 The spread of coronavirus across Australia could see unemployment reach about 10 per cent and house prices drop 20 per cent — and that may not even be the worst-case scenario, according to one economist.

With the threat of COVID-19 resulting in almost-hourly updates from federal and state leaders and agencies about travel bans and closures of various businesses, economists say putting an exact figure on how big the house price slump will be is tricky.

Over the weekend, as news of the Federal Government’s second-stimulus package hit and more business closures were implemented, the preliminary auction clearance rate dropped to 61.3 per cent across the combined capital cities.

It was still the second busiest weekend for auction activity so far this year, with 2,539 homes taken to auction across the combined capital cities.

While the Sydney and Melbourne auction clearance rate was higher than a year ago when property values were falling, they were well down on the recent highs of about 80 per cent.

A number of auctions were also withdrawn from the market.

The largest proportion of withdrawals was in Sydney where, according to CoreLogic, the early numbers indicated 13.5 per cent of auctions were pulled from the market, compared with only 3.9 per cent across Melbourne.

But with more businesses closing and social-distancing measures ramping up as public gatherings are restricted, more vendors will be pulling listings from the market.

AMP Capital chief economist Shane Oliver has predicted that unemployment will likely shoot up to about 10 per cent and this could result in a 20 per cent drop in Melbourne and Sydney house prices. 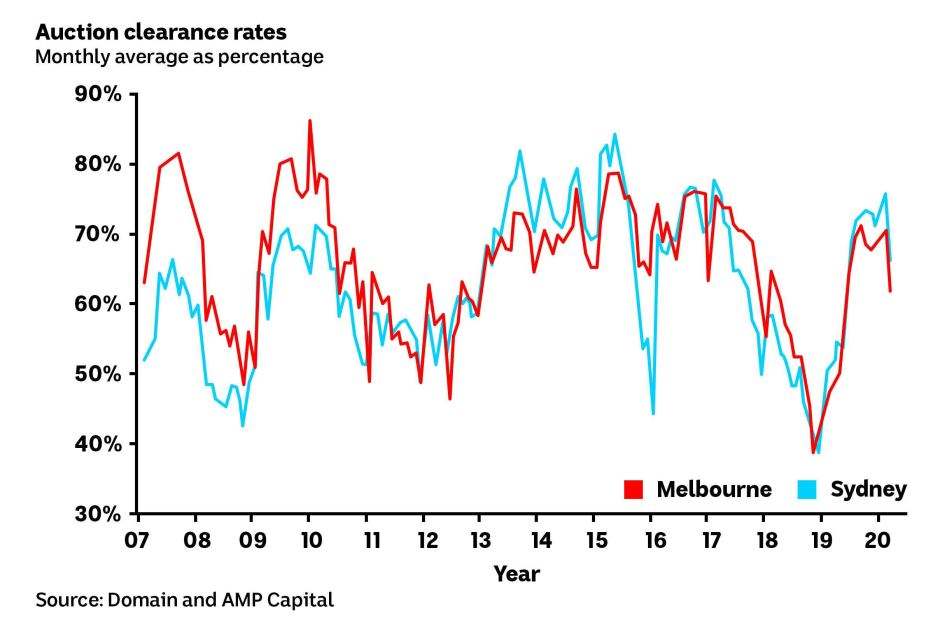 PHOTO: Auction clearance rates for housing in Sydney and Melbourne from 2007-2020. (ABC News)

What could trigger a major house price crash?

Dr Oliver said while the Reserve Bank last week moved to cut interest rates to a record low of 0.25 per cent and they were expected to stay there for some time, a recession was now likely, and this would cause the current unemployment rate of 5.1 per cent to double.

“A sharp rise in unemployment to say 10 per cent or beyond risks resulting in a spike in debt-servicing problems, forced sales and sharply falling prices,” Dr Oliver said

“If you look at the announcement the Federal Government made [on Sunday], it implies that Treasury thinks that unemployment will rise to 10 per cent.

He said this could create a negative loop that further weakened the already-vulnerable economy.

If people don’t have jobs, this results in less spending and more mortgage defaults, which sparks more selling.

In the best-case scenario, capital cities could see house price declines of about 5 per cent.

In the worst-case scenario, prices could fall about 20 per cent or more, he said.

“If unemployment overwhelms the system and the economic downturn goes well beyond the period due to the virus … we’re going to see much bigger falls in house prices,” Dr Oliver said.

CoreLogic’s Tim Lawless said Australia’s housing market would start “losing steam” by April, and the situation could be worse than expected because of high household debt.

Australia’s total debt to household income is at a record high of 186.5 per cent.

“If unemployment gets up to the 10 per cent mark, you have to expect there will be a rise in mortgage stress and downward pressure on prices.”

The areas worst hit by mortgage stress would be those exposed to tourism, and where there’s a higher portion of hospitality workers such as in some pockets of Western Sydney.

And if social-distancing measures were in place for an extended period of time, Dr Lawless said more vulnerable households may require targeted intervention to avoid delinquency.

The RBA last weekend announced it would buy Australian government bonds as part of its very first quantitative easing program, but Dr Lawless said there was “not much ammunition left in monetary response”.

He said unlike during the global financial crisis, when we were in the midst of a mining boom and monetary and fiscal policy were effective in helping Australia avoid recession, today there was less room to reduce the cash rate.

“We are in unchartered territory and … the impact [of coronavirus] on the housing market will depend on the duration of this downturn,” he said.

Fitch estimated the unemployment rate would rise to about 6 per cent in the coming months, but said such a rate “would be manageable”.

“It is a temporary shock over the next quarter or two,” Mr Zook said.

“However, if the spike turns out to be higher over time … that would be concerning to us.”

The crisis will have an end date

Moody’s economist Katrina Ell said the unemployment rate could hit 7.5 per cent this year, meaning an additional 300,000 people would be unemployed.

“We’re forecasting a decent jump in April’s unemployment rate as the shutdowns have stepped up from late March,” she said.

Ms Ell was hesitant to put a number on how severe the house prices plunge would be.

“The economic toll will ultimately depend on the number of infected patients and the length of time taken to contain the virus globally, as that is driving the subsequent quarantine and containment efforts that carry a hefty economic impact,” she said.

Deloitte Access Economics partner Chris Richardson was also hesitant to forecast how high unemployment and how low house prices would go, but pointed out there would be an end date, with people building immunity as the virus spread and a vaccine in the works.

“Recessions go on for a very long time and the worst is likely to be over faster than in a typical recession, which can go on for years,” he said.

“This will last somewhere between six to 18 months.”

Dr Richardson also pointed out that when house prices went down, eventually so did rent.

More properties could also be placed up for rent in coming months.

Across the globe, Airbnb rentals are moving from short-term to long-term listings.

If there was a sudden flood of rentals onto the housing market it could push down rental prices for certain types of properties, but Dr Lawless said that was too early to predict.

On Tuesday, the Real Estate Institute of Australia (REIA) called on real estate agents across Australia to make “significant changes” to the way they conduct house inspections and public auctions.

REIA president Adrian Kelly said: “The deliberate organising of a gathering of people by a real estate agent flies in the face of the directives of Prime Minister [Scott Morrison]”.

“To continue to arrange unmodified public open homes and auctions is clearly irresponsible.

“Whilst we obviously recognise the impact to trading this will have, it is important that the entire industry pulls together and supports the Government in their efforts at this time to limit the spread of COVID-19.”

One-on-one private inspections by appointment must become the norm, he said, coupled with appropriate safeguards recommended by health authorities.

“With regard to public auctions, these can still occur via telephone bidding or by using one of the many online auction platforms available,” he said.

Be the first to comment on "Coronavirus pandemic could see house prices plummet by 20 per cent, economist warns"