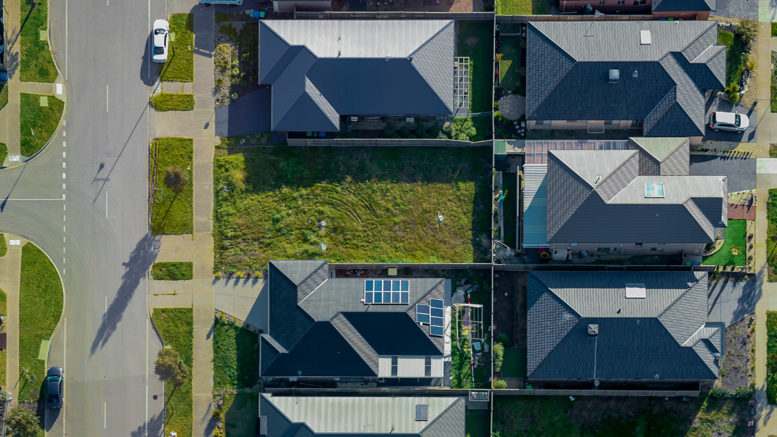 The past four weeks have seen rapid declines in the cash rate, several changes to fiscal and monetary policy, and a complete halt in business activity across specific industry sectors.

As daily updates roll out, enquiries around the state of the housing market have been mounting. Housing market and economic data from last month is largely redundant in capturing consumer and industry sentiment, and economic outlooks from last week are ancient history.

But CoreLogic has some daily and weekly metrics that provide more clarity around the state of the housing market right now. From survey data to platform metadata, a sudden, sharp slowdown in housing market activity is already apparent. The downside risk for housing values is also rising, especially considering forecasts that unemployment could reach around 11% over the next three months.

The decline in property price momentum has already been demonstrated in the daily index, which shows a decline in rolling 28 day growth. Although the series remains in positive territory, the trend is clearly pointing towards a slowdown in growth that is likely to move into negative territory over the coming months.

But aside from the daily index values, CoreLogic has access to other high frequency datasets that show where housing market activity is heading.

We are surveying the industry

Between the 20th and the 22nd of March, CoreLogic surveyed 411 real estate professionals nationwide through its RP Professional platform.

The majority of respondents were real estate agents (52%), followed by agency principals (34%), property managers (8%) and administration (7%). 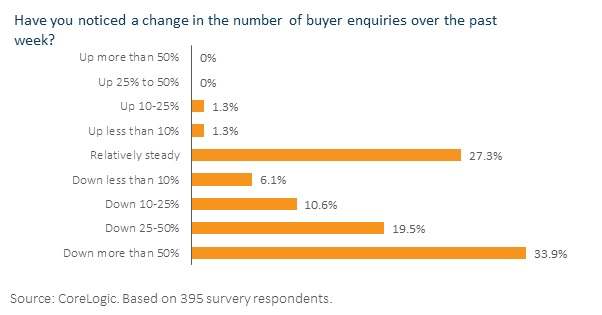 When asked about the change in seller enquiry over the past week, a third of respondents expressed that activity was down by more than half. 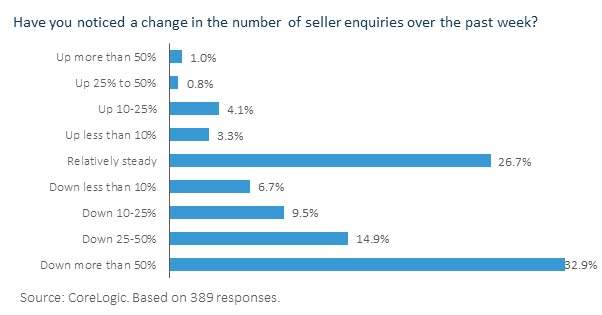 We are tracking leading indicators on listings

Metadata on the use of CoreLogic products can also be an indicator of market activity.

The CoreLogic Comparative Market Analysis report (CMA), is usually generated to help real estate agents with a listing campaign, because it has information about a property’s value estimate and nearby comparable sales. Therefore, the number of CMAs generated is usually a leading indicator of property listing volumes.

And CMA generation is falling sharply.

In the week to the 25th of March, the volume of CMAs generated fell 38%. Reports are down approximately 20% of where they were this time last year, and this time last year was near the trough of the national property market downswing.

With public auctions banned, we will be watching activity closely this weekend

The week ending the 29th of March was expected to see the highest volume of auctions this year, with 3,065 properties scheduled to go to auction across the combined capital cities.

With public auctions now banned, this weekend will be a test of how agents are able to facilitate auctions over the phone, via technology platforms. Otherwise, it is expected that most auctions will be withdrawn and put to sale via private treaty.

The final auction clearance rate for the week ending Saturday the 22nd of March was 56.9%, which was the lowest clearance rate result from June last year. This represents a decline of 8.4 percentage points from the previous week’s results. 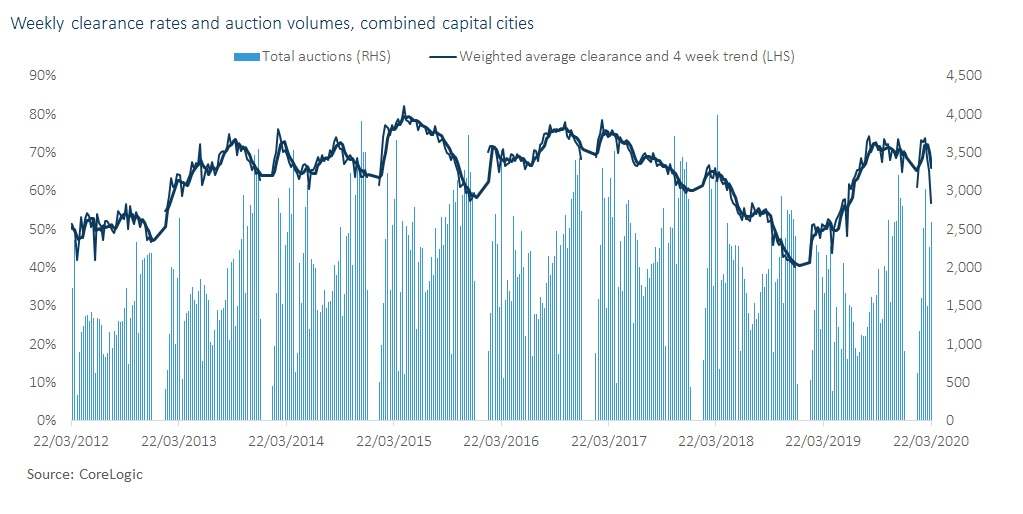 Between lower clearance rates, CMA generations and industry sentiment, it is clear that the COVID-19 responses are deterring both property buyers and sellers. However, the government restrictions that impact the housing market are vital for limiting the spread of COVID-19, and reducing the burden on the Australian health system. As the situation unfolds, it is still unclear to what extent transactions and values will be impacted, but it is important to remember that the trajectory for housing will shift once the economy moves toward normal, full scale production.

Full article is at: https://www.corelogic.com.au/news/corelogic-datasets-capturing-coronavirus-shift