The recessionary conditions in construction have deepened, with the industry experiencing the sharpest decline in activity in six years.

The Australian Industry Group/Housing Industry Association Australian Performance of Construction Index (PCI) fell by 3.9 points to 39.1 in July — readings below 50 indicate a contraction in activity, with the distance from 50 indicating the strength of the decline.

It is the eleventh consecutive month of contraction in the Australian PCI.

Ai Group head of policy Peter Burn said the problems were most acute in residential building, while there was a continued drop in commercial construction.

“Looking ahead, conditions look more fragile than they have for some time with new orders dropping further into negative territory driven by particular weakness in the pipelines of new work in the housing and apartment sectors,” Dr Burn said.

The pressure the sector is under was underlined by the collapse of a big apartment builder, Ralan Group, earlier this month.

The company, which is active in both the Sydney and Gold Coast markets, entered voluntary administration leaving billions of dollars worth of apartment projects in doubt and around $500 million owing to creditors.

The slowdown is also hitting job prospects across the sector.

The PCI employment index recorded a sharper rate of contraction — down 7.7 points to 35.9 — indicating a general reluctance by businesses to increase their workforce capacity amid ongoing soft demand at an aggregate level.

Three of the four sub-sectors making up the PCI slowed further, with only engineering construction being broadly stable, and even then it was in the sub-50 zone.

Apartment building was the weakest sector again, marking its 16th month in reverse, while house building has been contracting for 12 months. 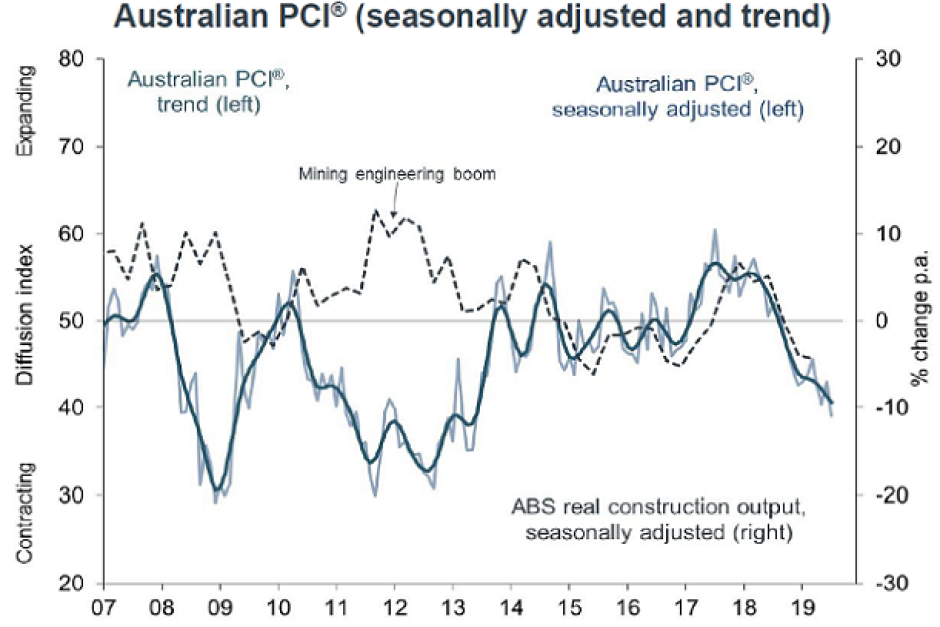 Builders are also being squeezed by tighter profit margins, with the selling prices index continuing to contract in July.

“This negative reading indicates that rising input prices and other costs are not, on average, being passed on to customers, as profit margins continue to be squeezed for businesses in the construction industry,” Dr Burn said.

The survey was taken after the Reserve Bank’s consecutive interest rate cuts in June and July and after the Federal Government’s tax package was passed.

“While residential building activity continued to contract in July there are signs that the pace of decline is moderating,” he said.

“The positive impact of two cuts to the cash rate and cuts to personal income tax rates will take time to have an impact on residential building but it provides a sound basis to expect that the decline in activity will slow over the months ahead.”

The more positive housing sentiment was also picked up in June lending data released by the Australian Bureau of Statistics today.

Excluding the refinancing of loans, mortgage approvals ticked up 1.9 per cent over the month.

Owner-occupiers did most of the heavy lifting (+2.4 per cent), while investors also displayed a marginally greater appetite for new loans (+0.5 per cent), although activity remains well below its peak.

First home buyers also jumped into the market (+2.1 per cent), with just on 9,000 taking out their first mortgage.

“Overall the data is consistent with anecdotes of enquiries picking up following the May election, though new lending activity is still around the lows last seen in 2013,” NAB’s Tapas Strickland said.

“Although not market moving, finance approvals are likely to be watched closely by the RBA in order to help assess whether recent cash rate cuts — and APRA’s recent easing of macro-prudential — is filtering through to the housing market and the economy in general.”

PHOTO: Lending to owner-occupiers and investors are still well below their peak despite a marginal recovery in June. (Source: NAB, ABS)